John Tahsuda, the Principal Deputy Assistant Secretary for Indian Affairs at the Department of the Interior, delivers the keynote at a Department of Justice event in Washington, D.C., on November 27, 2018. Photo: Office of Public Affairs – Indian Affairs

By Acee AgoyoWASHINGTON, D.C. — The Trump administration’s disjointed treatment of Indian Country was on full display in the nation’s capital on Tuesday as Native American Heritage Month came to a close.At a U.S. Supreme Court hearing in the morning, a senior attorney from the Department of Justiceargued that the so-called Five Civilized Tribes lost their sovereignty when Oklahoma became a state. According to Deputy Solicitor General Edwin Kneedler, Congress took away their status as “independent nations” by transferring their powers to another government.”Congress, as it always does in transforming a territory to a state, changed the territorial domain from here the tribes to the state and then it vested the governmental authority over that domain in the state because that domain had become the states, the general governmental authority,” Kneedler told the justices.But just a couple of hours later, the second highest-ranking official at the department was offering a different kind of argument. Rod Rosenstein, the Deputy Attorney General, said the Trump administration was committed to helping tribes exercise governmental powers on their territories.”The Department of Justice plays a unique role in the government-to-government relationship between the United States and Tribal nations,” Rosenstein said at a Native American Heritage Month event in the afternoon titled “Sovereignty, Trust and Resilience.”

Indianz.Com on SoundCloud: Department of Justice – Sovereignty, Trust and Resilience – Native American Heritage MonthThe competing messages went even further. As part of Carpenter v. Murphy, the Supreme Court case being closely watched throughout Indian Country, the Trump administration has disavowed authority over any crimes on the territories of the Cherokee Nation, the Chickasaw Nation, the Choctaw Nation, the Muscogee (Creek) Nation and the Seminole Nation.Even though federal prosecutors handle such crimes on reservations elsewhere, as the department underscored in a report released last week, Kneedler said that doing the same on these tribal lands in Oklahoma would be going too far.”So the criminal jurisdiction concerns are really very serious, and the United States is very concerned about what would be a drastic shift in criminal jurisdiction,” Kneedler told the justices.Rosenstein, on the other hand, presented a more cooperative approach in his remarks, highlighting a program in which tribes finally gained access to national criminal databases and another that focuses on addressing the high rates of violence against Native women.”These initiatives demonstrate our department’s steadfast commitment to improving public safety in Indian Country by promoting coordination among tribal, state, and federal law enforcement agencies,” he said at Justice headquarters, not far from the Supreme Court. 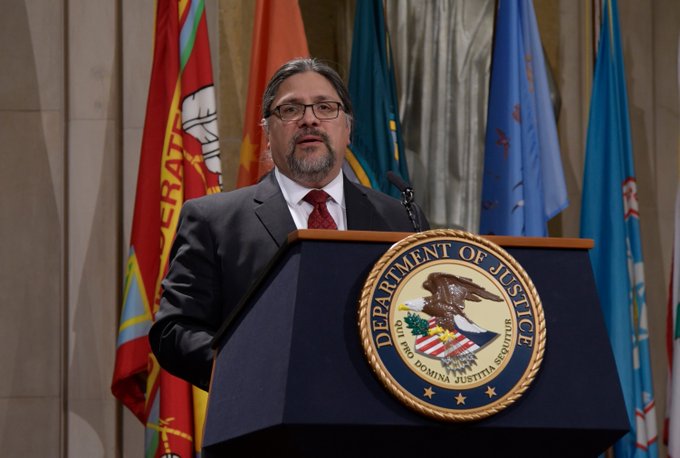 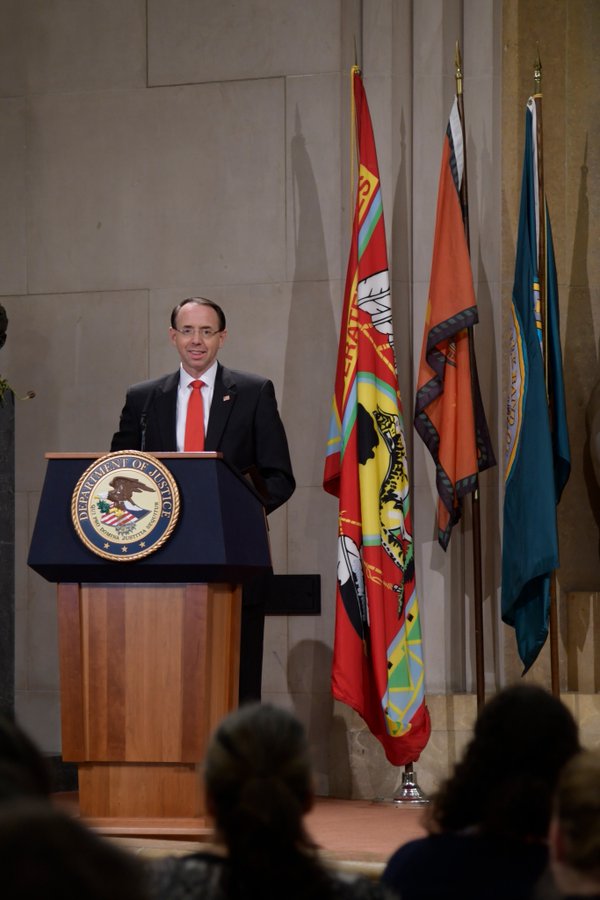 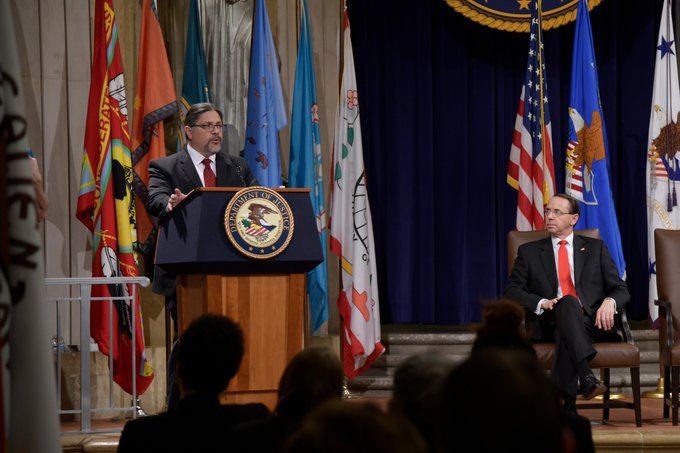 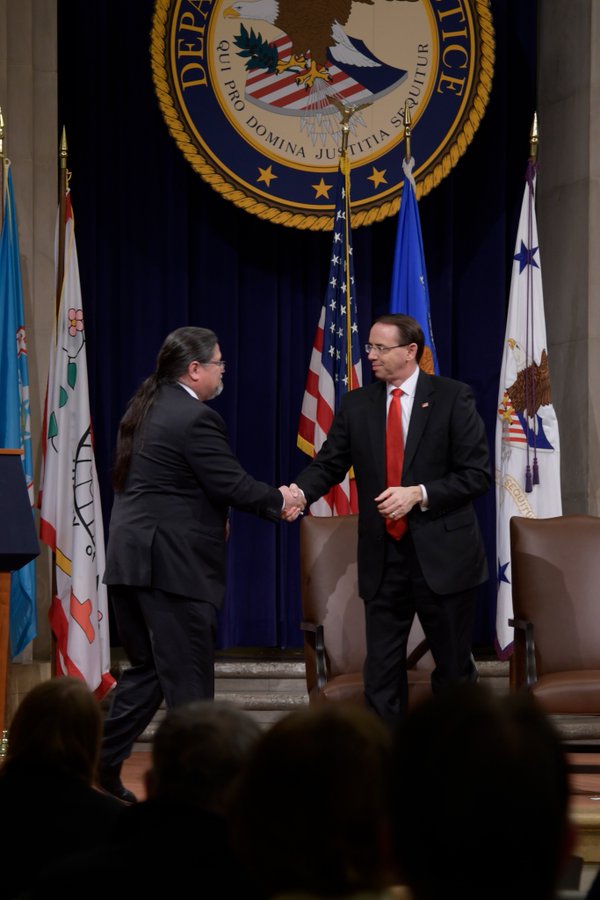 PDAS Tahsuda served as the keynote speaker at the @TheJusticeDept #NAHM18 Celebration today, where he spoke about the Influence of Native Heritage on Justice.

Thank you to DAG Rosenstein for the invitation and introduction. #IndianAffairs

So what might explain the disconnect? Another senior Trump official, this one from the Department of the Interior, relayed a familiar quote from Felix Cohen, a former government attorney who is often referred to as the “father” of federal Indian law, that helps shed some light on the way tribal sovereignty is currently viewed in Washington, D.C.”Like the miner’s canary, the Indian marks the shift from fresh air to poison gas in our political atmosphere, and our treatment of Indians reflects the rise and fall in our democratic faith,” said John Tahsuda, a citizen of the Kiowa Tribe who serves as the Principal Deputy Assistant Secretary for Indian Affairs in the Republican administration, said at the event.Ironically, the shift in power in Washington may be the undoing of the Trump team’s very own argument. That’s because Justice Neil Gorsuch, who was hand-picked by the president in hopes is solidifying a conservative majority on the court, is sitting out of Carpenter.Gorsuch, whose nomination was eagerly supported by Indian Country last year, used to serve on the 10th Circuit Court of Appeals, where Carpenter originated. Though he did not play a role in the decision — arguments took place when he was in D.C. for his confirmation hearing — his recusal is common practice for justices who might have come into contact with a case in their prior work.That leaves the Muscogee (Creek) Nation’s sovereignty in the hands of eight justices. In the event of a tie — a very real possibility, considering that it’s happened twice in Indian law cases in the last two years — the 10th Circuit victory in favor of the tribe’s rights would stand.

Department of Justice: Sovereignty, Trust and Resilience – Native American Heritage MonthBut advocates are counting on the Supreme Court of the United States (SCOTUS) to ignore the Trump incohesive approach to Indian policy and reaffirm the existence of the Muscogee (Creek) Nation’s reservation.“Carpenter v. Murphy gives SCOTUS an important opportunity to reinforce its longtime rule that only the United States Congress has the power to change a treaty with a tribe,” said Tim Purdon, an attorney who served as a federal prosecutor during the Obama era, taking on the same types of criminal cases in North Dakota that the new administration wants to avoid in a large part of Oklahoma.Purdon offered his remarks after the hearing in Carpenter, which lasted a little over an hour. He and several other U.S. Attorneys from Democratic and Republican administrations submitted a brief in support of Patrick Dwayne Murphy, a Creek citizen whose legal fight sparked what his tribe has called an “all-out assault” on its sovereignty.“As to any criminal justice concerns raised by the state of Oklahoma and the DOJ in this case, as a former U.S. Attorney my belief is that Congress has recently demonstrated through both the Tribal Law and Order Act and the Violence Against Women Act’s 2013 reauthorization that it is Congress, not the courts, that is best positioned to address any jurisdictional criminal justice issues that might result from SCOTUS enforcing the terms of the treaty in this case,” said Purdon, who now works in private practice.The initiatives Deputy Attorney General Rosenstein cited in his speech this afternoon happened to be authorized by those two laws.”Our offices work together with tribal law enforcement, state and local law enforcement agencies, and the Bureau of Indian Affairs to improve the safety and security of Native American and Alaska Native communities,” he said.